It took a while but we think it was worth the wait! Our 13 x half-hour arm wrestling documentary series Arm Nation has just been released worldwide. So now, Amazon Prime subscribers in the US, New Zealand, Australia, Canada, and the UK can catch this entertaining series. What a great reason to start your free 30-day trial?! 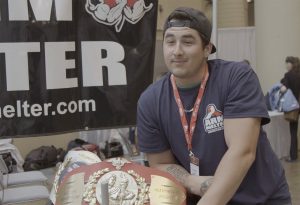 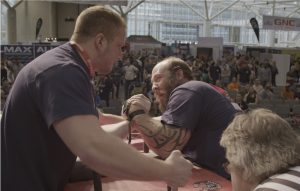 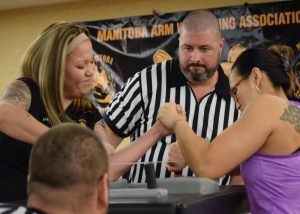 The engaging arm wrestling documentary series, produced for APTN, tracks a dozen passionate, dedicated arm wrestlers, as they strive to become the best in their weight class. Their situations are gripping as they rise through the ranks; a former competitive strong man learning that brawn isn’t enough to win, a mother trying to spread her arm wrestling enthusiasm on her rural Indigenous reservation, and a former world champion returning after fighting cancer for two years. The camera features these athletes over eight months, with cameos from international stars: Devon Larratt, Heidi Cordner, Mike Gould, Jeff Dabe, and Josee Morneau. Above all, it culminates in the fierce competition of the Canadian Arm Wrestling Championships. The stark ups and downs of balancing their everyday lives and wrestling bring intense drama to this series.

Interested in seeing the worldwide release of “Arm Nation”?