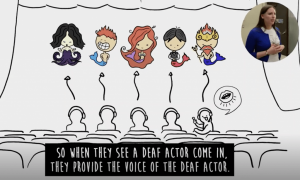 Our 8 x 8-minute documentary web series “Seen & Heard” is making the international festival rounds! It started at the end of May, in Yorkton, Saskatchewan where it was nominated at the Yorkton Film and Video Festival in the “multicultural under 30 minutes” category. It was also up for the Kathleen Shannon award. In addition, this summer, the series is an official selection at the Melbourne Webfest. It will be screened July 18-21 down under, and at the Sicily Webfest where it will unspool August 8-11 on the isle of Ustica. This fall from September 26-29, the series is an official selection at the Minnesota Webfest. We’re excited to be a part of these prestigious festivals!